When I first starting playing WoW I was truly overwhelmed.  I couldn’t keep my characters (commonly called “alts” in WoWland) alive.  For someone new to WoW there is so much you have to learn and your brain can only absorb a given amount at a time.  Every WoW player has been there.  The fortunate ones have a mentor, someone who had gone before (thank you Mickey) to ask. 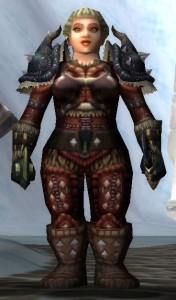 Oighrig, level 74 rogue dwarf.  Do not ask me how she lifts her arms without impaling herself on the protrusions of her shoulder armor.  No clue.

By the time I got around to trying a rogue (sneaky backstabber class), I had played a number of different classes.  I had started and deleted a warlock (FYI, gnomes cannot see around their big blue demon sidekick which is a separate frustration), a mage (magic user who was so pathetic – totally my fault, not hers – she remained in the main Alliance city handling auctioning and never leaving town) and a bunch of hunters all at different levels all with different professions (alchemist, tailor, etc.).

By the time I started playing the rogue, and because the rogue made sense to me, I cruised along doing not badly until I hit Arathi Highlands and had to escort Kinelory (Night Elf druid) through a bad guy stronghold to grab plans from a wicked alchemist.  Escort quests are all about throwing you off the deep end with lots of people coming at you at once.  This is a quest I literally breezed through with my hunter so I didn’t give it a second thought.  After failing the quest three times in a row (either I died, she died or we both died, all of which equaled FAIL) I took a break to do some actual research on how you’re supposed to play a rogue.  Yeah, really.  Did I do it when I started?  Oh, come ON.  You know me.  I dove in head first and paddled like mad.  No one is surprised I drowned, least of all me.

Rogues wear leather armor.  Okay, it’s better than cloth but it’s still one step up from tissue paper.  As an effective means of defense, it’s not cutting it.  This armor means, though rogues are a melee (up close fighting) class, they can’t take much damage before they croak.  If they stand in front of the bad guy and stab like mad they’re going to take damage and all damage costs coin to repair.  You’ve got to develop another way, something other than standing before the target with knife/sword/mace/axe in hand.  Points to me for figuring this out . . . yeah, I’m rolling my eyes at me too.

As I leveled my rogue I developed a style that let me do the job without taking a lot of damage.  The development of this technique happened over the course of leveling my rogue to the mid-sixties (levels are from 1 to 90).  After dying so ignominiously on the Kinelory escort quest, I finally started reading my spells and practicing different sequences to see what, for me, worked.  From that point on I started spending less on armor repair.  Who knew?

Rogues get sap and stealth early in the game.  Sap can only be used from stealth which means once the fighting starts, sap is off the table.  Sap, however, does have some pretty nifty uses.  If you have to take out a target and he’s in a group you can use sap to disable one of the group members thereby reducing the number to be fought by one.

Sap can also be used to make a target hold still so you can get a positioning advantage (behind them), pick their pocket and breathe before stabbing them in the back.  Go rogues!  So if you are working on a target group you can, one by one, sap them and pick their pockets.  Once all pockets have been picked, leave one sap-disabled before starting your combat.  Rogues get a lot of nifty junk boxes by picking pockets.  Oh, and extra coin.  Always extra coin.  Very occasionally they’ll get something really good.  I keep thinking if I sap one of the big guys I’ll get something good from their pockets but no joy.  Coin is all they offer.

Oighrig’s level 60’s rotation was premeditation (provides two pre-fight combo points which are vital for the use of kidney shot), sap (only if the target won’t hold still), ambush (extra points if dagger in main hand), kidney shot (disabling shot with duration based on number of combo points available), shadowstep (instantly behind target), backstab or ambush (depending on if stealth is still up) and, if the target hadn’t already dropped hemorrhage until it did.  In a level on level fight with a target she usually dropped her target before the cooldown on kidney shot expired.  This is with poison, sharpening and weighting buffs.  Go Oighrig!

If you’re playing a rogue, take the time to learn what your spells do and how your equipment plays into the damage you can inflict.  Rework your spell rotations each time you get a new spell or skill.  The goal is to drop the target as quickly as possible.  If your rogue is under level 90 and isn’t taking down most targets that were sapped before fighting in under five or six seconds, rethink your rotation. Use your grinding (kill 10, kill 15, etc.) quests to practice your spell rotations to see what works and get the timing down.  You have to be out there killing things, put the time to good use.